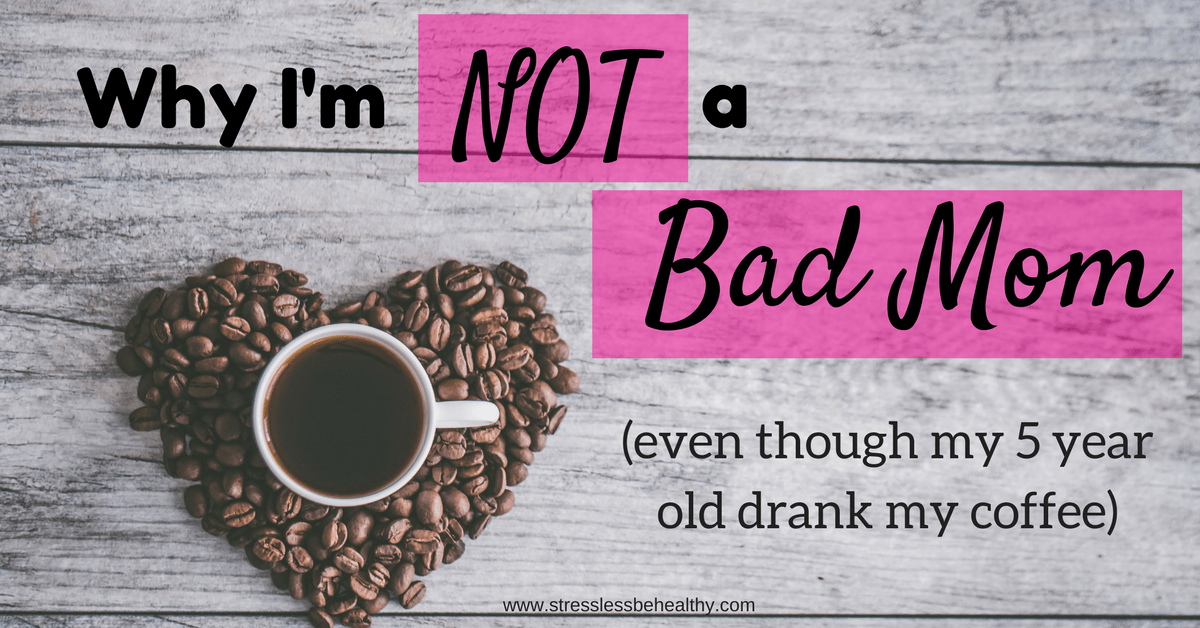 So, have you ever felt like a ‘bad’ mom, and I don’t mean like the moms from the movie that came out called Bad Moms. I’m talking about feeling as if you did something that other people, or maybe even yourself, think poorly of when raising children. Ever feel that way? I have…..and recently too.

I swear I’m not a bad mom though. I stay home with my girls while my husband works, and when I worked, he stayed home with them. I make sure they eat well and brush their teeth. They go to bed at a reasonable time. I do everything a mom is supposed to do. But, sometimes, something will happen to cause us to feel this ‘mom guilt’ or feel like a ‘bad’ mom. And, I don’t think it’s right.

We shouldn’t feel like a bad mom just because something happened that we didn’t want to happen. We should feel like we’re good moms for not wanting it to happen and learning from our mistakes with parenting. For example….just the other day while I was in the shower, my daughter drank my coffee….

But, that’s not the only reason she drank my coffee. And, I sure can’t use that as an excuse. She’s rebellious in a way to draw attention to herself (what child isn’t); but no, she was smart about what she did. She’s a very clever little girl, and always has been just a tad too clever. She knew that when the shower is on that I can’t hear what she’s doing all that well. She also knows that I don’t randomly walk out of the shower right in the middle of it at any given time.

I’m not sure if she planned this, or if she just saw it and drank from it because it was accessible to her. My guess would be simply because it was in the fridge and it was mine, so she assumed it would be good.

She’s got my instinct when it comes to finding sweets

I know coffee is more so considered a drink, rather than a sweet, but with the creamer in it, it’s quite delicious and sweet. And, I have a knack for finding anything sweet in my home; I’ve been like this since I was little, just ask my mom! Unfortunately, my 5 year old picked this trait up from me.

She’ll go through the fridge and the cupboards until she finds something sweet to eat. She’ll honestly stand in the fridge for 5 minutes looking for something. She’s also been going through a growths spurt lately, like for the last 6 months, and doesn’t stop eating. (I swear I feed her, I feed her around 10 times a day, she just doesn’t stop eating!)

I constantly have to tell her to close the fridge. Or, to stop trying to climb up onto the counters to get into the cupboards. I even caught her walking across the counter the other day, with her bare little feet; my two old now does this, too…

There IS special food in our home

So, it doesn’t help that there’s certain foods in our home that are pretty much ‘off limits’ during the day; which includes foods that my husband gets for himself (like chips, cookies, and other junk food that is really tempting to my 5 year old, and myself).

Now, combine that with the fact that she can find any sweet we have in our home, her rebellious attitude, and the fact that her metabolism is running like crazy. Of course she may try to sneak some of his good food from time to time. I don’t usually let her, unless I take some myself (shhh…don’t tell him, we’re not perfect- sometimes you can only have so much rice and broccoli).

But, I had no idea that she would drink my coffee. Coffee has always been off limits to her, and she knows this. It’s not because it’s unhealthy or anything, it’s simply because she’s a kid; kids and coffee don’t mix very well. Not only for the fact that it’s to give you more energy, but also, as she learned, it doesn’t make kids feel very good. She probably thought that it’s ‘off limits’ like the other food was ‘off limits’, and would be alright to sneak.

She Learned her Lesson…and so did I

After I got out of the shower, I went to drink my coffee, which I had in the fridge. Expecting to find my half a cup of coffee left, that I was really looking forward to; I found an empty coffee cup instead. I was tired, that’s a given, but I didn’t think I was losing it that badly.

I felt so bad in that moment that she had drank half a cup of coffee. Like, that’s the one thing that kids should not consume (of course there’s worse things), but there’s been studies, and psychological theories, showing the effects of caffeine on kids; and they’re not good.

Luckily, the only effects she had that she showed, was the belly ache. I made sure she drank plenty of water the rest of the day and let her rest. (I think the studies are more towards kids who drink caffeine on a regular basis, or maybe my mom brain is just hoping that.)

This doesn’t make me a bad mom

So, I’m not really a bad mom, and I should stop beating myself up about this. She learned her lesson and I learned mine.

So, no, I’m not a bad mom. My daughter simply taught me a valuable lesson in parenthood, and that’s to know that you are always being watched by your children and to do only what you would want to see them doing. If anything, that makes me a great mom; we both learned valuable lessons that day! 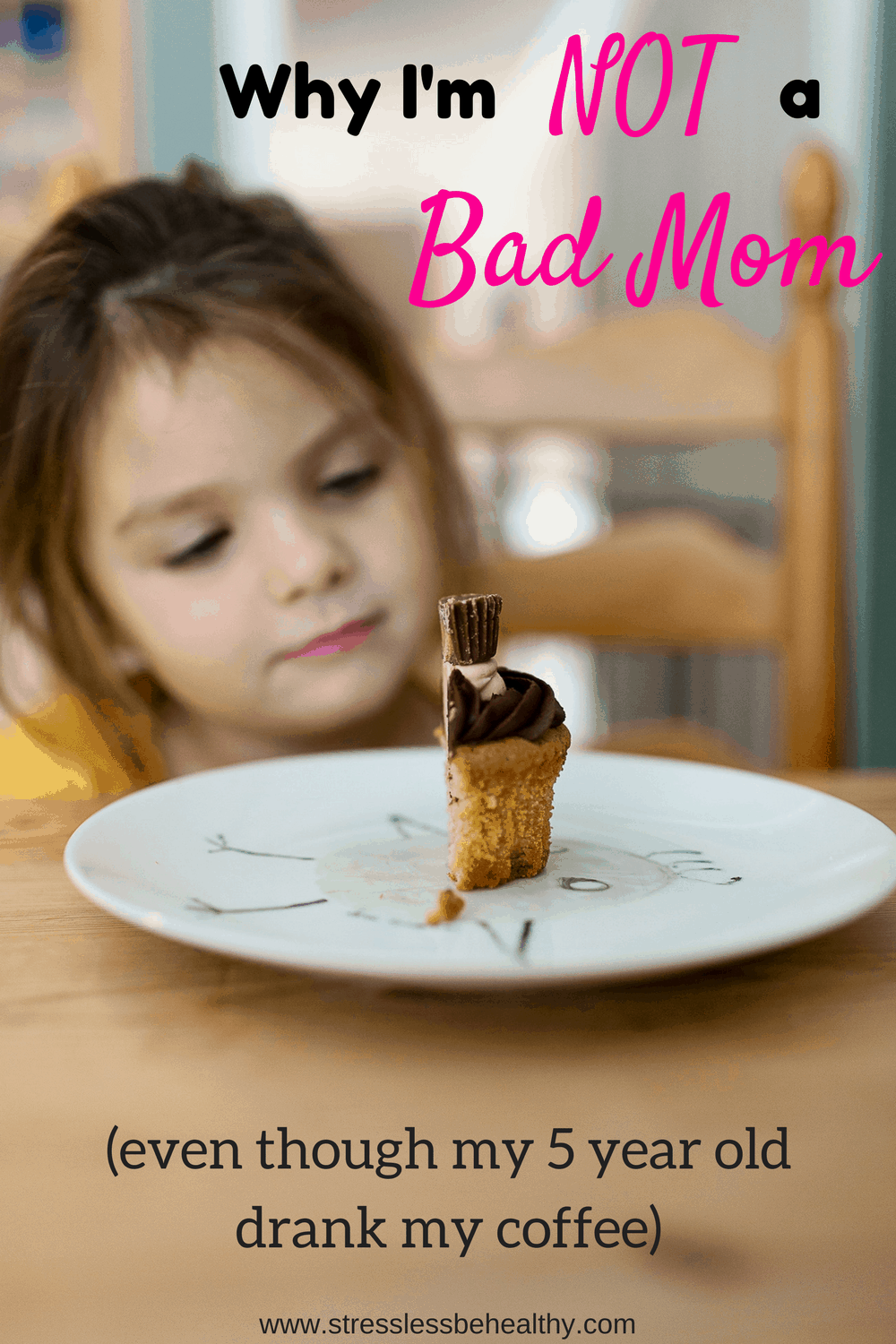 If you’re looking for more ways to feel better about parenting, read The Best Action You can Take If You Want an Easier Life as a Parent!

OR, subscribe to receive weekly emails from me, along with weekly challenges to help us be more intentional moms!

The Best Action You can Take If You Want an Easier Life as a Parent!

3 Simple Ways to Have Good Days with Little Ones 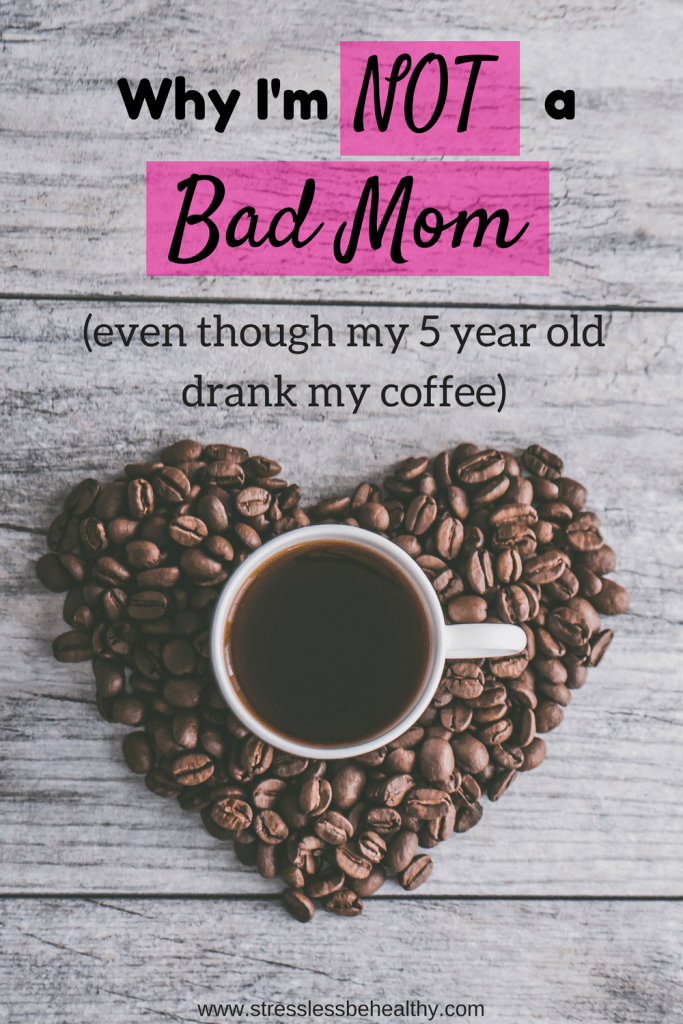 Hi, my name is Shawna, I’m a mom of three beautiful little girls and I love creating vegan recipes that they can help with! Stress Less Be Healthy is all about helping you eat better, discover kid friendly recipes, and create meal plans that your family will be happy with!
Read More!
Disclosure: All posts may contain affiliate links (meaning if you end up purchasing something when you click on the link then I may get a commission on it, with no extra cost to you, of course). This may allow for me to keep this site up and functional. For more information on what this means, visit my disclosure page.
Disclaimer: I am not a doctor or registered dietitian (RD). The information provided on this website is for informational purposed only and are not meant to treat, cure, or prevent any health issue. I am not liable for how you interpret or use the information provided. I recommend you consult with an RD when raising vegan children to ensure they get all nutrients needed for healthy development.
104 shares