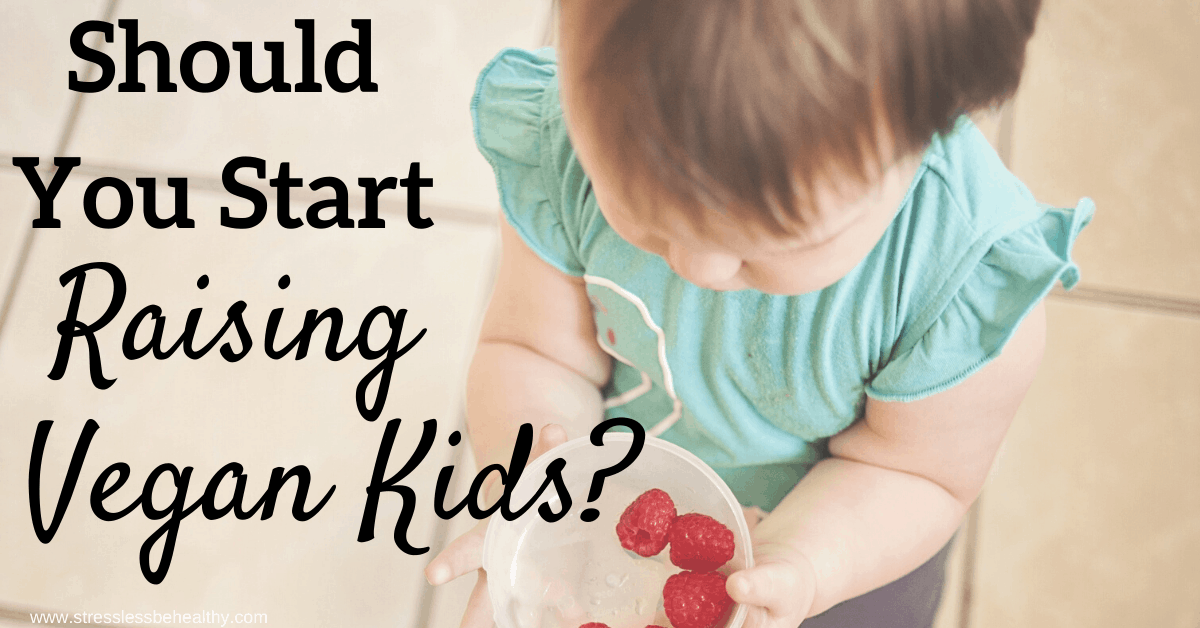 Should You Start Raising Vegan Kids?

Becoming vegan is starting to be more popular and mainstream in our culture today than even a decade ago, and for good reasons, too. It’s great for our environment, the animals, and even our own health, when done properly! But, what about our children? Should we start raising vegan kids, too?

What you feed your children is up to you. No one can change that.

We all know how hard parenting can be, and feeding a child can sometimes be tricky, whether they are going through a picky eating phase or other people are telling you how you should be feeding them.

However, there are many benefits to feeding your children a vegan, or plant based diet, if planned correctly, even if other family members don’t approve!

8 Steps to Raising a Vegan Child

10 Life Changing Documentaries That Will Make You Healthier!

55 Easy Vegan Kid Meals (For When You’re Too Tired to Cook!)

Want to Remember This? Pin Should You Start Raising Vegan Kids? to your favorite Pinterest Board!! 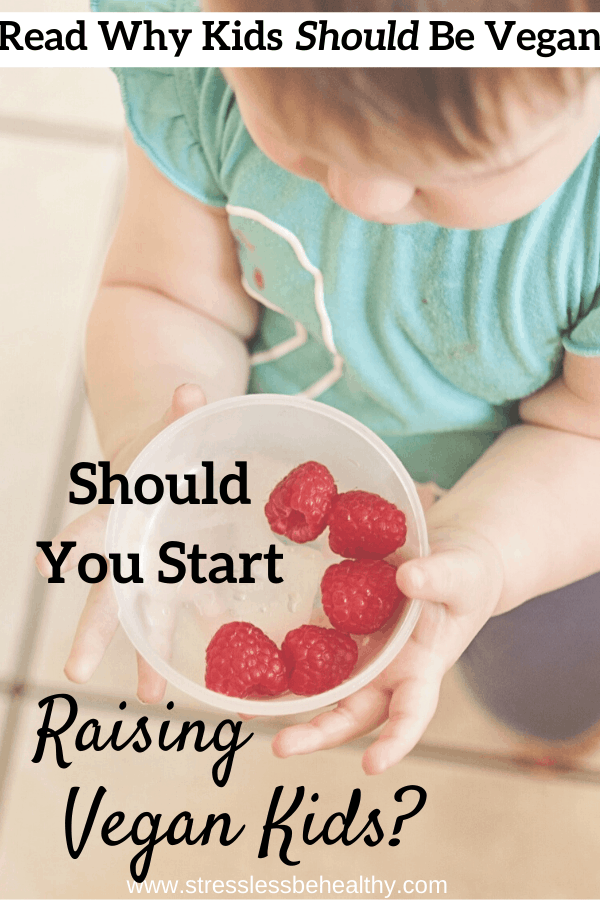 Let’s Go Over A Few Questions You May Have…

Is it safe for a child to be vegan?

It is safe for a child to be vegan, if their diet is properly planned.

If you know nothing about nutrition and just wing every meal you feed them, don’t give them a vitamin or supplements, and let them eat vegan junk food all the time; then it would not be safe. However, doing the same thing not on a vegan diet is just as harmful, if not more so.

Most of the nutrients that your child would be getting from animal products can be found in plants, just without the saturated fats and cholesterol that block arteries and contributes to diabetes.

However, there are some nutrients you’ll need a supplement for and we’ll go over that below.

Is it healthy to raise kids vegan?

As long as you’re not feeding them a junk food vegan diet. Raising kids on a healthy vegan diet means that they will be getting more vitamins and mineral, more fruits and veggies, and more whole grans and healthy proteins. These foods are also all part of a whole food plant based diet.

And, the closer to a plant based diet we can get, the better!

What do you feed a vegan child?

For those asking this question, I’ll ask you ‘what food are you already feeding your child?’

If your goal is raising a healthy child, then you probably already know somethings got to change!

However, if you feel you are already raising a healthy child in terms of what they eat, but they aren’t vegan (and you want to raise vegan children), then rest assured it’s not that difficult!

Most meat and dairy products have a vegan version these days!

Think about all the different varieties of non-dairy milk, cheese, and yogurt. The meat alternatives, such as morning star products. If you’re trying to avoid processed foods, as well, then only use these as a transition period while you learn to make similar foods from scratch. They won’t even know the difference between chicken nuggets and morning star soy nuggets. Ha, even my husband can’t taste the difference, and with more than just their nuggets, too!

For more information on what to feed a vegan child, check out: How to Teach Children to Build a Healthy Plate

What should a vegan toddler eat?

A vegan toddler should eat the same as a toddler who isn’t vegan, simply remove the animal products and replace with whole plant foods. These whole plant foods are the ones that should be in their diet in the first place, but aren’t in most cases because most people aren’t raised to eat these.

For more healthy food ideas for toddlers, check out:

What supplements do vegan kids need?

You can get them in gummy forms (be sure they don’t have gelatin in them!) or in a liquid form. I personally buy them in the liquid form and add them to my kids smoothies everyday; they can’t even tell they’re there.

Depending on what exactly your kids will eat, you may need a supplement for iron, vitamin d, and possibly a few other things. So, it may be best to have them take a mutli-vitamin, however, if they currently eat a standard American Diet, they’re in more need of supplementing with vitamins.

If you’re unsure which vitamins your child may need, you could ask their pediatrician, or consider speaking to a nutritionist who understands vegan nutrition.

When eating a vegan, mostly plant based diet, you don’t have to worry about gaining weight, as an adult. Don’t worry, if you feed your child the same food, they will still grow and gain weight. They just won’t grow horizontally as much as other kids, whom eat the Standard American Diet!

They also won’t become a child obesity statistic; just be sure to opt out of the vegan processed foods and go for a more whole foods plant based diet. Not only will they be consuming less junk, but they’ll also be getting more of the vitamins and minerals that they need.

Plus, obesity in children, or anyone for that matter, leads to chronic health issues such as diabetes, heart disease, and more later in life. Choosing to limit or avoid animal products in your child’s diet will help them live longer and less diseased lives!

Not only will a proper vegan diet help your child maintain a healthy weight, and grow properly; it will also help prevent or decrease the likelihood of your child having mental health issues.

Of course, there are other factors that contribute to mental health diagnoses, but believe it or not, what we eat plays a huge role in it. Some of the biggest contributors are the more processed junk foods that are marketed to kids, like candy.

For example, ADHD in children, depression, anxiety and more can sometimes be prevented or treated by avoiding processed foods, such as color dyes and processed baked goods.

Let Them Be Apart of Saving Our Planet

Most children love animals; animal noises are even one of the first things that most children learn when learning to speak! So, if you’re honest with your kids about what they are actually eating, there’s a good chance that they may not want to eat their animal friends anymore.

This type of thinking can lead to them not only loving animals, but loving the planet and wanting to do good on it. To treat it kindly so it will be kind back. It’s amazing how compassionate some children can be, even at young ages. When children find out about global warming and learns ways to help reverse it, it’s simply common sense to them to start doing those things.

They know that they need the Earth to live on, why not give them a chance to help save it before it’s too late!

Raising your children on a healthy vegan diet will increase the chances that they will eat that way their whole lives, and raise their children vegan, as well.

Raising them aware of the health benefits and improved world health that a vegan diet produces encourages the continuation of a healthy and sustainable diet. This can only be a good thing for humankind and planet Earth.

It’s survival of the fittest, and the fittest are going to be those who eat mostly plants or plant based foods, those who exercise, have the energy to exercise, and live an overall healthy life. Those who won’t survive will be those who eat poorly, with the majority of their food intake coming from processed junk, animal products, and convenience foods.

Raising a healthier generation that understands what eating for health and sustainability means is what we need in order for our planet to survive.

Concerned About Raising A Vegan Child?

However, be sure to give them a B-12 vitamin supplement or eat food that is fortified with B-12, as that is the one essential vitamin that is only bioavailable in animal products.

For any other health concerns you may have, be sure to consult your child’s doctor, or better yet, find a dietician that specializes in child or vegan nutrition.

If you choose to raise your child on a proper vegan diet, be glad to know you are doing the best for your child as far as their nutrition is concerned!

If you’re ready to start raising vegan kids, start by reading The ULTIMATE GUIDE for Raising Vegan Kids HERE! So you’ll be well prepared for almost anything that will come up! 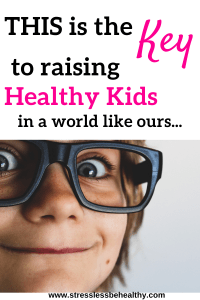 Hi, my name is Shawna, I’m a mom of three beautiful little girls and I love creating vegan recipes that they can help with! Stress Less Be Healthy is all about helping you eat better, discover kid friendly recipes, and create meal plans that your family will be happy with!
Read More!
Disclosure: All posts may contain affiliate links (meaning if you end up purchasing something when you click on the link then I may get a commission on it, with no extra cost to you, of course). This may allow for me to keep this site up and functional. For more information on what this means, visit my disclosure page.
Disclaimer: I am not a doctor or registered dietitian (RD). The information provided on this website is for informational purposed only and are not meant to treat, cure, or prevent any health issue. I am not liable for how you interpret or use the information provided. I recommend you consult with an RD when raising vegan children to ensure they get all nutrients needed for healthy development.
75 shares