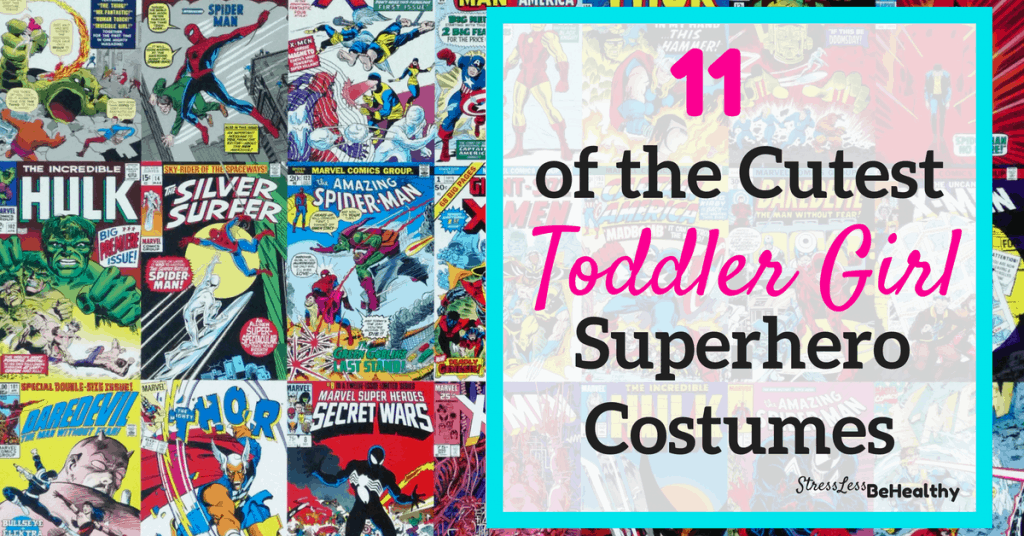 Have your little girl feel like a super hero of her own with these adorable costumes!

Everyone wants their little princesses to be, well, princesses for Halloween. Why not give girls some power and have them be super hero’s instead?

This is for all you somewhat geeky moms out there who want to show off your, or your little girls, individuality and build some self-confidence for them, at the same time. We need some more female superhero’s to look up to.

Seriously, it’s kind of sad how few DC or Marvel female super hero’s there are. (Or, how little known they are.) And, there’s even less that have costumes available for little girls to wear on Halloween.

But, some of these costumes are just so cute, you may want to head over to amazon to purchase them right now!

Related Posts for Halloween: 13 Halloween Safety Tips to Teach Kids All Year Round

Wonder Woman is probably one of the most iconic female super heroes there is. She’s strong, powerful, and she’s technically a princess, too! Princess of the Amazons, that is. She also has the lasso of truth, capable of getting anyone to stop lying to her. Fortunately, the lasso is not included in this Halloween costume; who would want to lie to a cute little toddler, anyways?

Super girl, Clark Kent’s cousin from Krypton, has a lot in common with Wonder Woman. Such as being strong and powerful…many super heroes are, and we should be encouraging our girls to be, too. But, Super Girl also has the same powers as Superman; being able to fly, see through anything except lead, melt things with her eyes, ect.

Plus, this costume is perfect for anyone living in an area that tends to cool down in the fall. I remember growing up in New York and some years it would snow on Halloween! Best to have long sleeved and long panted costumes.

Black Widow doesn’t have any real super powers like Wonder Woman and Super Girl, unless you count aging at an extremely slow rate, rapidly healing, and basically never getting sick. (Wouldn’t we all love to have those powers!) Instead, she is highly trained and intelligent. She’s a psychological mastermind of sorts, which can be highly dangerous; just like her bracelets, which fire electric static energy blasts. (Don’t worry, the bracelets in this costume are harmless.)

So, if you have a spunky little girl who likes to do acrobat-like moves, play in the realms of psychological war-fare (‘I hate you, mommy.’) Or, you just want a unique super hero costume for your daughter; then this would be the choice for your little girl!

There are a few different stories about Bat Girl and who she really is; the daughter of a League of Assassins member and trained to be a deadly weapon, the daughter of a police commissioner, a Robin counterpart,  becoming a paraplegic/ computer hacking expert (Oracle), the list goes on.

Spider Girl has basically the same super powers as Spider man, her father, but she’s more agile and can sense deception. So, don’t think of her as a girl version of spider man, she’s her own person; just like your little girl is!

Just add some blue or red leggings and this costume is complete for a chillier Halloween night (don’t forget a spiderman hoodie– both my girls have one)! 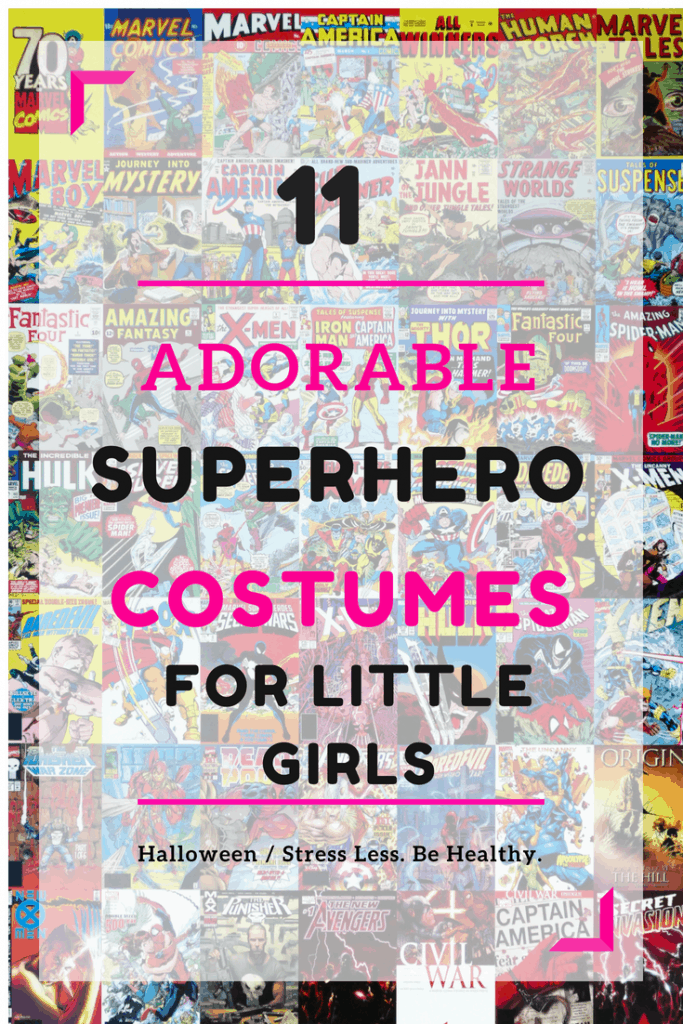 You could consider her to be Avery Ho or Jesse Quick (Jesse Wells); either way, she’s not just the girl version of the flash. (Or, if you’ve been keeping up with The Flash on CW, you could even consider this to be Nora West-Allen.) And, sure, she has the same super powers as the Barry Allen, but she is certainly her own person.

For some reason, probably to make the costumes look adorable, many of them simply have tutu’s or skirts; simply grab some red leggings and then this costume is perfect for a Fall night of trick-or-treating!

She started off as simply being saved by Bat Man, and then became her own super hero (and Batmans) as a teenager. Taken under Batmans wing, she’s like the daughter he never had. So, if you have a little batgirl who sings to her own tune; dress her up as Robin instead.

Simply add in some green or red leggings for a complete costume, unless of course you live in the south, then this costume may be enough!

She started off with the Ring of Volthoom, then sacrificed all the power from that ring (along with the ring itself) to save the Flash’s life. Then given a Green Lantern Ring, she became another Green Lantern from Earth!

Don’t forget to grab some green leggings for your little super hero, so their legs don’t get cold when saving others!

American Dream doesn’t have any real super powers, per se; she’s completely human, but is in peak physical condition, highly trained, intelligent, and a great leader. She even saves the Avengers from a parallel reality!

This super hero can give any little girl hope of becoming a real super hero when they’re older, unlike most boy super heroes. Just add in some blue or red leggings so their legs don’t freeze when saving other heroes.

Is she a villain or a super hero!?

Cat woman started off as batmans enemy…and then somehow became part of the bat family. So, there’s been  a little bit of a debate on this one; she’s been both, but ending on the right side has to count for something, right?

Either way, this costume is adorable and perfect for any little girl who is sick of seeing, or wearing, tutu’s and skirts for Halloween.

Ok, so she may be a bit crazy, and ironically, started off as a psychiatrist to the criminally insane. You could also say she’s simply a people pleaser, who is loyal and completely obsessed with the human mind in its entirety, insane or not. (Don’t worry, not everyone who’s studied psychology goes crazy like her. The irony is interesting, though!)

However, this outfit is adorable, even if your little girl isn’t a tad bit crazy or unpredictable like Harley Quinn herself. Due to the newest movie she’s been in, Suicide Squad, you may want to grab this wig so she can be more easily recognized. I wouldn’t recommend the props, though, she doesn’t need to be bringing a mallet or baseball bat trick-or-treating.

As you know, Halloween is a time for kids (and some grown ups) to dress up and pretend to be someone else. But, you don’t need to wait til Halloween every year to empower your girls to be heroes. Encourage them to use their strength, and wit, for good in life everyday while growing up. Help boost their confidence and self esteem without them having to be someone else.

But also, don’t forget to simply let them have some fun and dress up as a super hero, with different powers, on Halloween; to show the little boys that girls can be heroes, too!

11 of the Cutest Toddler Girl Superhero Costumes – Have your little girl feel like a super hero of her own with these adorable costumes! 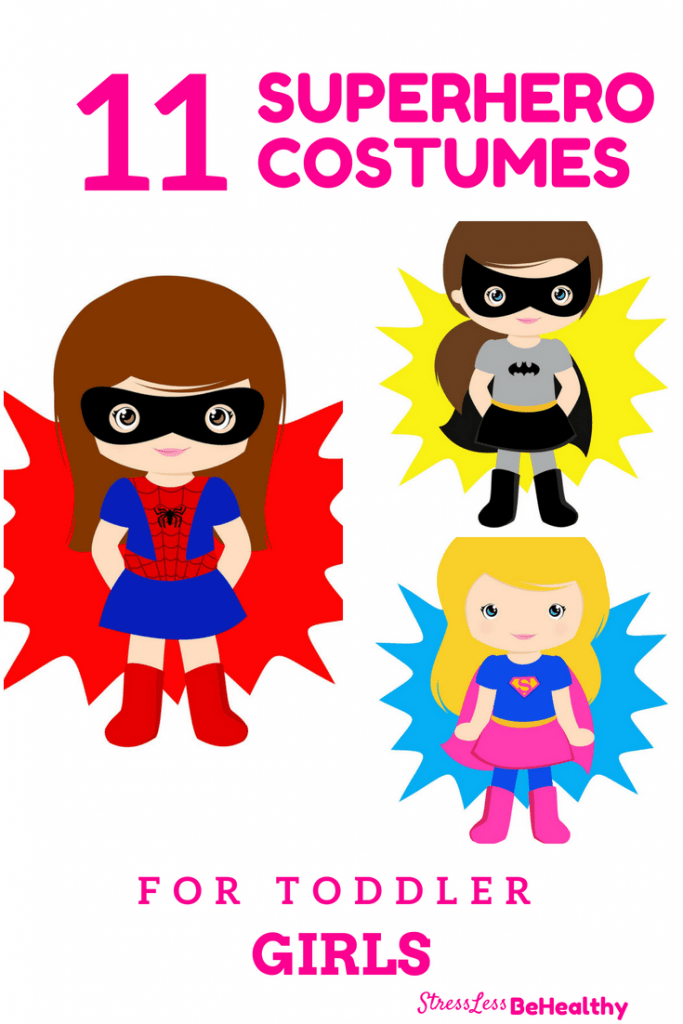 14 Reasons Every Stay at Home Mom Should Have Amazon Prime!

The Best Popsicles for Kids on Halloween! (Leave the sugar out! These Candy Corn Popsicles are naturally sweetened with fruit!) 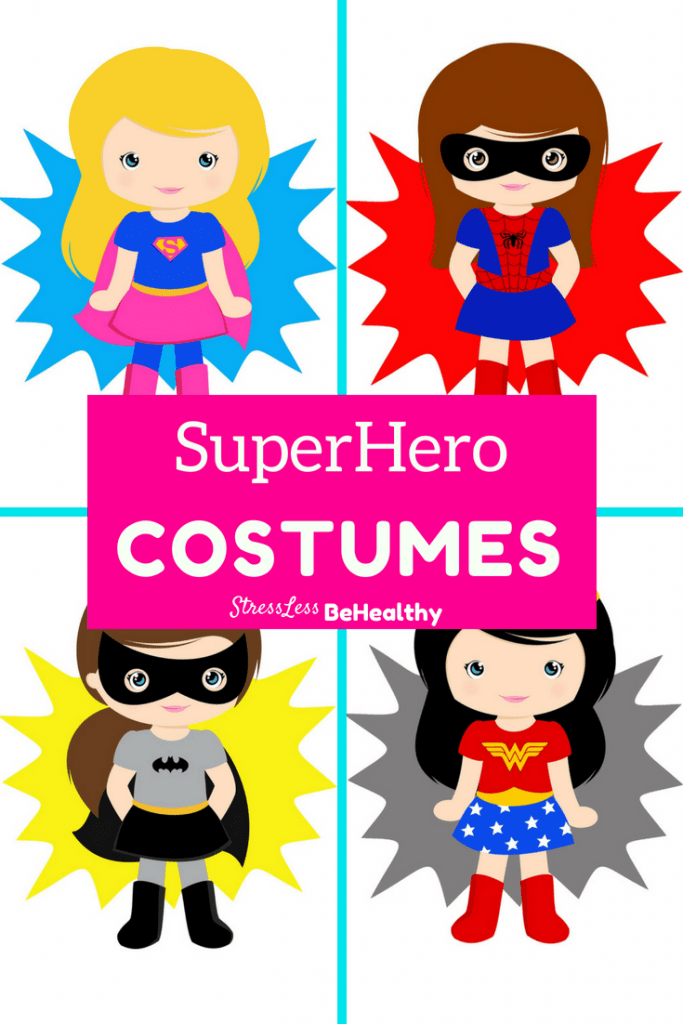 Hi, my name is Shawna, I’m a mom of three beautiful little girls and I love creating vegan recipes that they can help with! Stress Less Be Healthy is all about helping you eat better, discover kid friendly recipes, and create meal plans that your family will be happy with!
Read More!
Disclosure: All posts may contain affiliate links (meaning if you end up purchasing something when you click on the link then I may get a commission on it, with no extra cost to you, of course). This may allow for me to keep this site up and functional. For more information on what this means, visit my disclosure page.
Disclaimer: I am not a doctor or registered dietitian (RD). The information provided on this website is for informational purposed only and are not meant to treat, cure, or prevent any health issue. I am not liable for how you interpret or use the information provided. I recommend you consult with an RD when raising vegan children to ensure they get all nutrients needed for healthy development.
111 shares