In this article you will find a delicious, satiating, and kid approved Vegan Quinoa Stew Recipe!!

Have you ever heard of quinoa?

And, I can thank the little recipe book that came with my nutribullet for learning about it. It wasn’t a quinoa stew recipe in it, more or a wrap with quinoa in it.

But, it’s always so surprising to me when I ‘discover’ a new food.

And, it’s sad, but I don’t even know which foods most people know about and eat, and which ones regular people didn’t discover and start selling til recently.

Like chia seeds, flaxseeds, and honestly almost any nuts and seeds. Lol, I don’t think I even knew those existed when I was younger, except for peanuts.

And, lentils, legumes, and split peas?

Where did they come from?

I didn’t know about them until my first college nutrition course, when I learned that I should’ve been eating them all along because I’ve been a vegetarian since I was seven and had started to try to be vegan just before starting that course…

But, enough about my lack of food knowledge when I was a kid, let’s talk about this quinoa stew you want to learn to cook…

Stop stressing about meal planning and grab THIS instead! Kid approved, healthy vegan recipes for the whole family for TWO WHOLE WEEKS!

Go check out the meal plan, shopping list, and meal prep guide in your email!

*Note; it may take a few minutes for the email to reach you, if you don’t get it in the next 15 or so minutes, feel free to email me at [email protected] and let me know.

Want to Remember This? Pin Easy Quinoa Stew Recipe to your favorite Pinterest Board!!

Questions You May Have About Quinoa…

Does quinoa get soggy in soup?

I wouldn’t say that quinoa gets soggy, but it does absorb the liquids around it and could become gelatinous if it’s sitting in or cooked in waayyy too much liquid for far too long.

However, my husband and I came up with the best quinoa soup recipe ever when he was on paternity leave for our third child, you can find that recipe here!

Can you eat quinoa with meat?

I suppose you can, but I wouldn’t recommend it!

Also, consider the fact of what meat actually is; the decaying carcass of an animal, of something that was once living and breathing, and had a family of its own.

Humans consumption of meat is also destroying our planet; ever heard of global warming?

It’s kind of a big deal, and the biggest contributor isn’t you driving your kids around to soccer practice and polluting the air, it’s animal farming. Animal farming is also responsible, ironically, for thousands of species going extinct, and the destruction of rain forests.

So, before considering eating meat at all, consider how greedy you are for wanting to destroy our planet to throw money at businesses run by billionaires!

to answer the question, you can, but don’t!

And, be sure to learn why and how to start raising your kids vegan, too!

Can I use quinoa in soup instead of barley?

Yes, you can replace another grain with quinoa in a soup or stew.

(So excited I know that now, if you had asked me that 10 years ago, I would’ve thought you were crazy or from a different country, because I didn’t know what either of those things were 10 years ago!)

Can you freeze quinoa soup?

Again, I suppose you can.

But, I generally don’t freeze soups after I make them. I’ve tried that before, not again!

You can however, freeze ingredients for soup, including cooked quinoa. Cooked quinoa should stay good frozen up to a month.

Start by adding the oil to a large pot (if you use oil), and then let it sit while you chop the veggies.

If you’re omitting the oil to have this recipe plant based instead of vegan (go you!), then skip this step, oil is not absolutely needed, the veggies should have enough water in them to saute by themselves.

If needed, add a splash of water or veggie broth when needed to avoid sticking or burning.

Speaking of the veggies, dice the pepper and onion.

Once the pepper and onion are diced, throw them (not literally ‘throw’) into the large pot and saute until the onion is translucent.

Then, add in the quinoa. This is mostly just to flavor the quinoa before it gets cooked.

I suppose you can skip this step if you want.

But, with having kids, it’s not always possible to skip a step that gives us an extra couple of minutes to answer all the questions they have that urgently need answering the minute we step into the kitchen to make dinner!

Hopefully you cut up the potatoes while answering your childs questions, if not, do it now!

Now, add in the spices, potatoes, and water.

Let boil, then simmer til the water is absorbed.

Once the water is absorbed, add in the corn and keep cooking it til everything is warm.

*Hint, if using canned corn, drain the corn first. If you don’t, it won’t turn out well, I’ve tried… as I’ve made this recipe hundreds of times and have experimented to find the easiest possible way to make it!

Once done, serve to your picky eaters, and yourself if there’s any left, and be amazed while watching them eat something with veggies in it!

Also, place a mat, or something, on the floor under the toddler.

Picking up cooked quinoa on the floor is no fun game…it’s almost as fun as cleaning chia oats out of their hair! 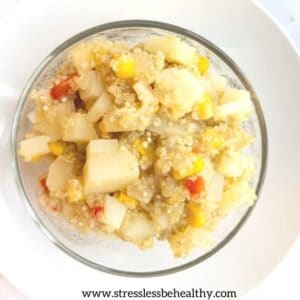 Feel free to use different colored veggies and quinoa! This recipe works well with white quinoa & tri-colored. The red quinoa by itself does not get soft as it should with this recipe, so if you try that then you may need more water and time. Any colored bell pepper works well in this recipes. I’ve also tested this recipe with sweet potatoes and it wasn’t bad!
Keyword quinoa, stew

I hope you and your family enjoy this quinoa stew!

Please leave a comment on what you think, whether it be about the stew or the commentary above!

Want to Remember This? Pin Easy Quinoa Stew Recipe to your favorite Pinterest Board!!

Stop stressing about meal planning and grab THIS instead! Kid approved, healthy vegan recipes for the whole family for TWO WHOLE WEEKS!

Go check out the meal plan, shopping list, and meal prep guide in your email!

*Note; it may take a few minutes for the email to reach you, if you don’t get it in the next 15 or so minutes, feel free to email me at [email protected] and let me know.

How to Make a Vegan Buddha Bowl with Tofu