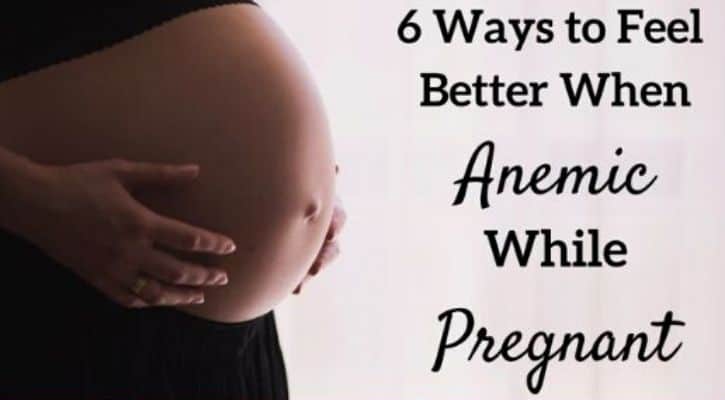 6 Ways To Feel Better When Anemic While Pregnant

Being pregnant is tiring enough, whether it’s your first child, or your third. But, add in being anemic while pregnant, that’s a whole other story of being tired!

When you’re pregnant with anemia, you’ll barely have enough energy to do the absolute necessities throughout the day. Your goal will be to get yourself, and other kids if you have them, through the day and make sure you’re all eating enough.

It’s tough, to say the least!

Others may see it as being lazy, because you spend as much of the day as you can napping.

But, they don’t understand what it’s truly like to be anemic and pregnant. You may not even realize you are anemic and may pass off your tiredness as simply being pregnant.

If you’re not sure if you are anemic, ask your doctor if they did a complete blood count test, or checked if you were anemic, with one of the initial blood tests they took. Honestly, they take so much blood from us when we first become pregnant, I don’t even remember what all they check for at first, maybe you’re the same way.

Anemia may even develop later in your pregnancy, I wasn’t diagnosed with anemia until I was almost in the third trimester.

But, let’s go over a few things, to ease your mind, help you understand what anemia is and who’s at the most risk to be anemic, and how to relieve some of the exhaustion that comes with being pregnant with anemia.

And, before we get started, I want to disclose that I am not a doctor or a health professional, I’m simply a mom of three who was anemic with her third child.

What to Eat When You Have Morning Sickness All Day: 54 Ideas

What Mama’s Need to Have for a Smoother Postpartum Recovery

Want to Remember This? Pin 6 Ways To Feel Better When Anemic While Pregnant to your favorite Pinterest Board!! 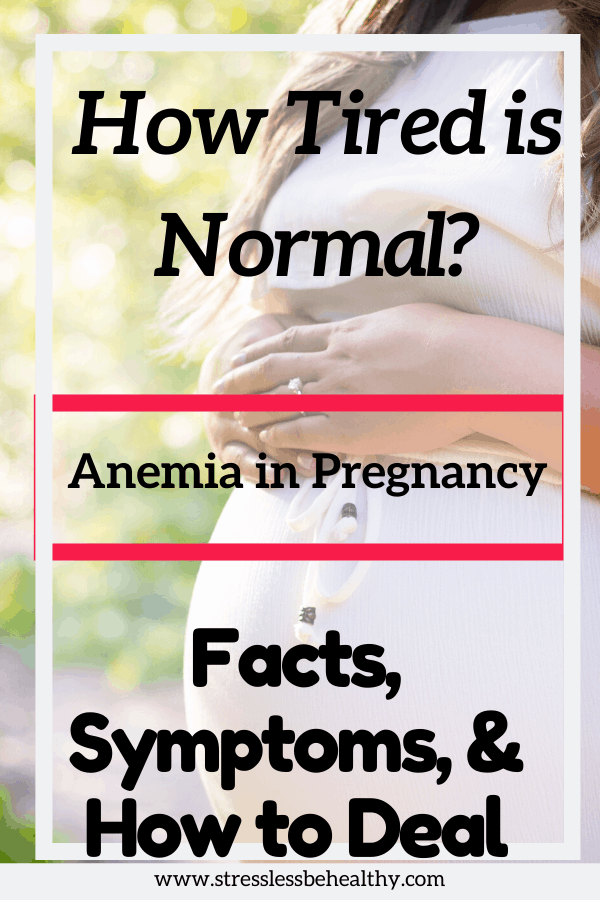 What is Anemia in Pregnancy?

When your doctor tells you that you’re anemic, while you’re pregnant, what they are really saying is that your red blood cells aren’t able to carry oxygen to all the places it needs to in your body and your baby’s. Needless to say, it’s pretty serious!

Your cells need oxygen to work right, which is why you may feel even more tired or weak than usual.

If you have anemia while pregnant, you need to listen to your doctor about it and treat it as they tell you to. If it goes untreated it puts you at risk for complications, such as preterm labor.

The most common cause is that we don’t get enough of the right nutrients when we become pregnant and produce more blood to circulate throughout our bodies. This makes it so that we either don’t make enough red blood cells, or that the red blood cells aren’t able to do their job sufficiently, which is to deliver oxygen to cells.

The nutrients that you would most likely be lacking in would be iron, folate, or vitamin B12. Lack of iron is the most common cause in pregnancy, so we’ll go over that type of anemia below.

And, it may not be that you aren’t getting enough in your diet, it may just be that enough of it is not getting absorbed. Either way, without enough iron being absorbed, your body isn’t able to make enough of the protein, hemoglobin, for red blood cells to do their job.

Who is Most at Risk?

If you’re healthy, eat a normal diet, and aren’t having multiples, then your chances of being anemic during pregnancy is not as high as others! But, below is a list of the most common reason any pregnant woman would be at risk for developing anemia during pregnancy:

Here are some of the most common symptoms:

If you have some of the symptoms and any of the situations above that would put you at risk, make sure you talk to your doctor and have them check you for being anemic. Even if it was checked for during your initial blood work, have them check again in your second and third trimester. I wasn’t diagnosed until my second trimester.

There are things that can be done to alleviate the exhaustion, but it starts with a diagnosis.

6 Ways To Not Feel So Exhausted! 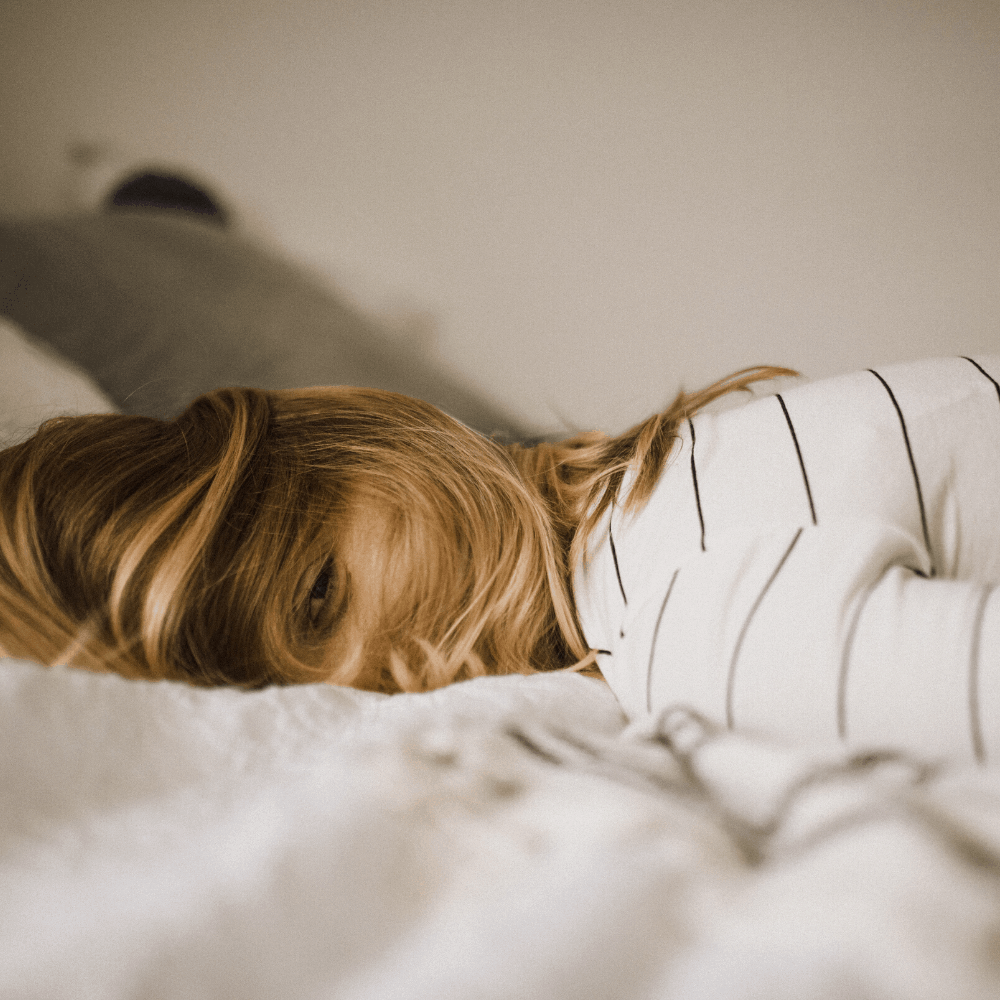 If you were diagnosed with iron-deficient anemia while pregnant, the most common kind, the first thing your doctor will do is tell you to take an iron supplement. You can pick some up over the counter, or your doctor may write you a prescription for these.

Iron is not water soluble and could be dangerous if you take too much. Which is why there’s no iron in my gummy prenatal vitamins; if they did have iron in them and one of my other kids got to them and started eating them like candy, it would not be good!

To be on the safe side, I personally had my doctor write a prescription for me. If your doctor would rather you just pick it up yourself, be sure to ask them exactly what amount to get.

If you only get non-heme iron from your food, such as if you’re vegan or plant based, then it may be the absorption of the iron giving you problems, so be sure to keep reading to find out what not to take iron with. Even if you do eat animal products or meat, it would be best to keep reading, as well.

The body, vitamins, and minerals, are complex things. If you’re taking more than one vitamin or mineral at the same time, there’s the possibility that only one will be absorbed!

In the case taking iron and calcium together, calcium is the one being absorbed.

So, don’t take your iron with a glass of milk, or within an hour or 2 before or after having a lot of calcium. Or, it would be like you never took your iron at all!

Just like the conflict with iron and calcium, coffee and tea can block absorption of iron, as well.

This is because of the tannins in coffee and tea. I won’t go into great detail of how this all works and how it blocks absorption, just know that there may be more than one reason to ditch the caffeine while pregnant! 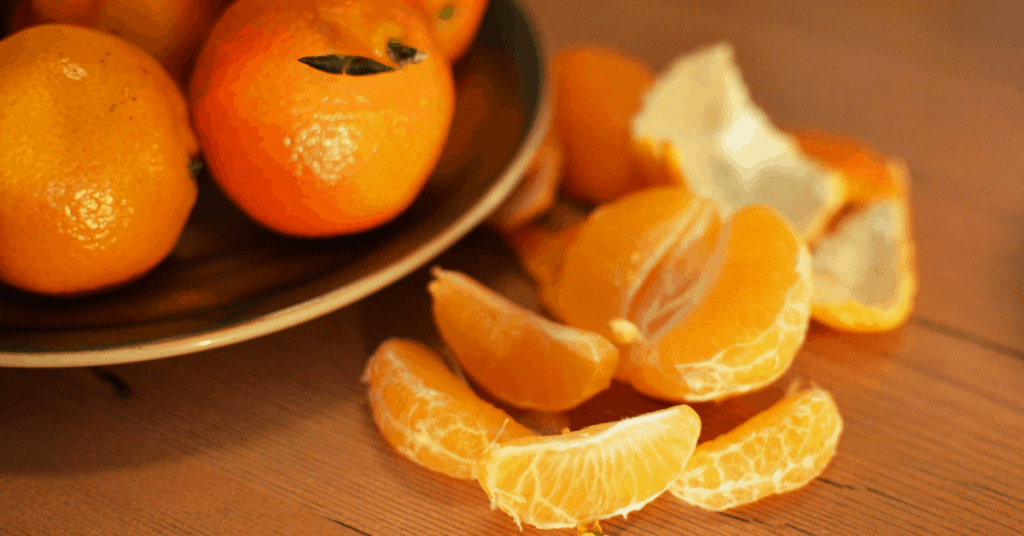 Just as there are vitamins, minerals, and tannins that prevent the absorption of iron, there are also ones that improve absorption!

Vitamin C is one such vitamin that will help your body absorb iron, so go ahead and take your iron with a glass of orange juice. Or, eat an orange and some strawberries after taking it.

Whatever fruits or veggies you have with vitamin C in them, put them to more use and eat them with your iron.

Just because you’re now taking an iron supplement, doesn’t mean you’re off the hook for eating foods high in iron. You should continue to eat foods high in iron and make them a part of your regular diet, long term!

If you eat a vegan or plant based diet, consider these foods regulars in your diet now:

This isn’t an exhaustive list, but it will get you started in the right direction!

Check out How to Make a Vegan Buddha Bowl with Tofu to help increase your iron consumption, it has tofu and broccoli! 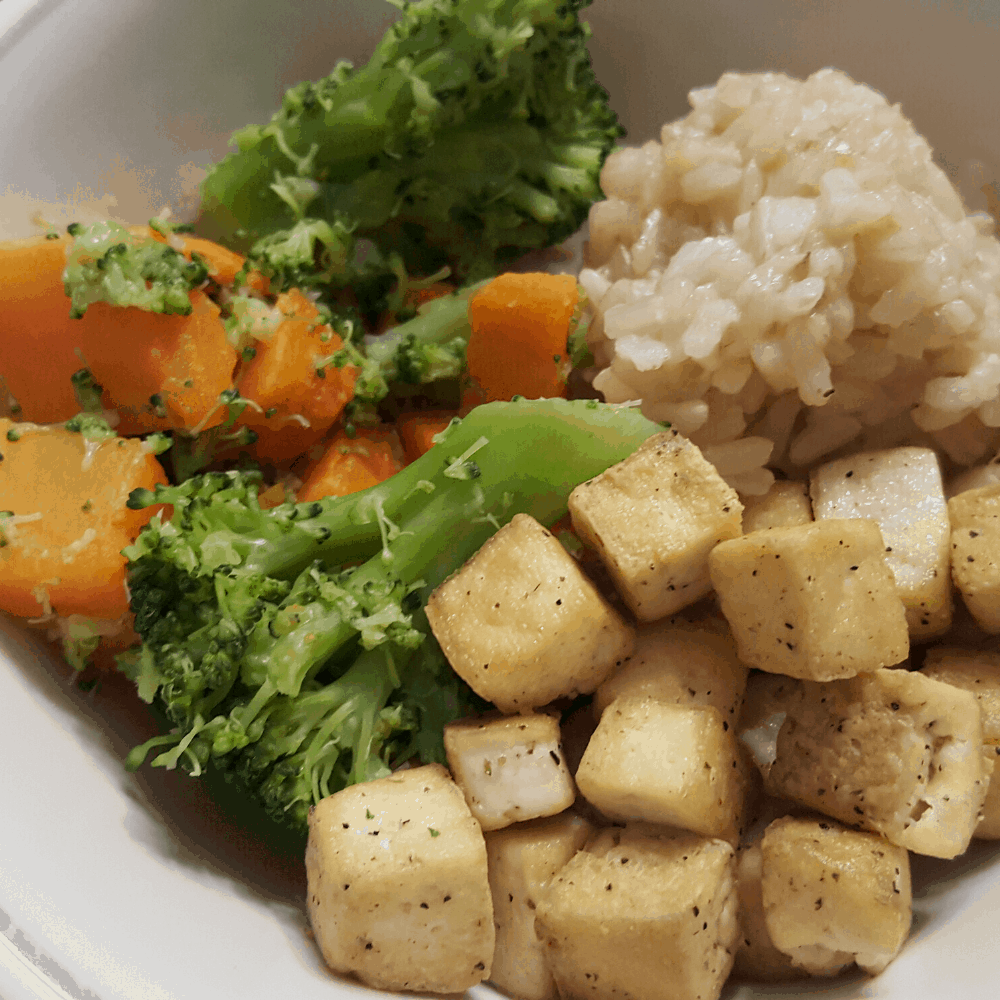 Being pregnant with anemia is a serious condition and should be treated as soon as you find out about it, as it can cause other risks. It’s not just making you exhausted!

Being that exhausted is a sign from your body that something more is wrong!

If you let it go untreated then you’re at risk for:

But, having a baby with anemia would be quite scary and worrisome. Even my doctor (who is also my baby’s pediatrician) recommends that women who were anemic during pregnancy and breastfeed (which is my case), should have their babies take a vitamin D that includes iron at 6 months of age. If you’re in the same situation as me, make sure you talk to your doctor before changing your infants vitamins.

When it is treated properly, there’s not as much to worry about. From my own experience:

Being Anemic While Pregnant Is Not The End Of The World!

So, know that being diagnosed with anemia during pregnancy isn’t the end of the world.

It can be treated, and you can avoid the risks associated with it from taking the treatment seriously and doing what your doctor says.

Be sure to ask to be tested if you feel like you may be at risk for anemia, or are experiencing any of the symptoms associated with it. Don’t be afraid to bring it up to your doctor, they are there to help you.

And, if treated, you may even feel a ton better after you give birth!

Every pregnancy and recovery is different, but I felt better than ever in less than two weeks after giving birth!

To find out more about pregnancy and anemia, or about the other types of anemia, go here.

Want to Remember This? Pin 6 Ways To Feel Better When Anemic While Pregnant to your favorite Pinterest Board!! 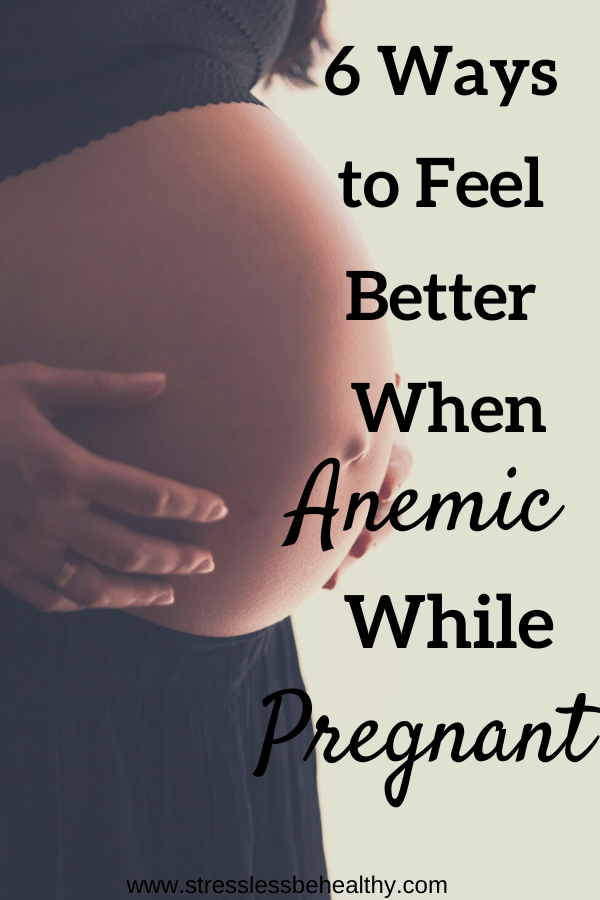 Hi, my name is Shawna, I’m a mom of three beautiful little girls and I love creating vegan recipes that they can help with! Stress Less Be Healthy is all about helping you eat better, discover kid friendly recipes, and create meal plans that your family will be happy with!
Read More!
Disclosure: All posts may contain affiliate links (meaning if you end up purchasing something when you click on the link then I may get a commission on it, with no extra cost to you, of course). This may allow for me to keep this site up and functional. For more information on what this means, visit my disclosure page.
Disclaimer: I am not a doctor or registered dietitian (RD). The information provided on this website is for informational purposed only and are not meant to treat, cure, or prevent any health issue. I am not liable for how you interpret or use the information provided. I recommend you consult with an RD when raising vegan children to ensure they get all nutrients needed for healthy development.
49 shares