In this article you will find a delicious Cinnamon Bun Smoothie recipe that even non-vegans will love! Honestly, they probably won’t even realize it’s no vegan! And kids love it, too!

Want to Remember This? Pin Cinnamon Bun Smoothie to your favorite Pinterest Board!!

How to Make This Cinnamon Bun Smoothie

Start by getting out all of your ingredients;

For this recipe I used my nutri-ninja, the order I placed the ingredients were in the same order as I listed them above, starting with the bananas.

For a nutri-ninja, the liquid goes in last.

If you’re using a vitamix, add them in using the order here;

Then blend for about 45 seconds, in 10 to 15 second intervals if using a nutri-ninja (use the Auto-IQ BLEND button).

If using a vitamix, it may not need the full 45 seconds, but at least 30 seconds, starting at 1 and then slowly increasing to 10.

Q&A’s About Smoothies You May Have…

Can you put cinnamon in smoothies?

I don’t like putting cinnamon in really fruity or citrus-like smoothies.

But, they go great in smoothies that have oats, bananas, and non-dairy yogurt, like this recipe.

Cinnamon in smoothies would also pair nicely with;

What can replace Banana in Smoothies?

My kids and I LOVE BANANAS!!!

Seriously, we go through so many bananas in a week that my husband calls us monkeys.

But, he can’t stand bananas, even in smoothies.

Yet, I know how many nutrients and how beneficial smoothies can be in anyone’s diet; so I’ve had to be creative to get him to drink them…without complaining about bananas.

Some banana replacements for smoothies;

Should you put yogurt in a smoothie?

Honestly, it depends on the type of smoothie you’re having and why you’re considering adding it and how you want your smoothie to taste.

I understand that non-dairy yogurt isn’t cheap, unless maybe if you make your own. I don’t know, I don’t make my own.

So, if you’re worried if your smoothie won’t be complete unless it has yogurt in it; don’t be!

This recipe is one of very few recipes that I use that uses non-dairy yogurt; most of the recipes I make don’t need it.

For this recipe though, YES, you do need yogurt in it for it to taste the way it is intended to taste. 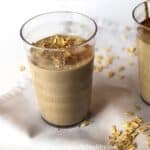 Perfect for fall; check out this cinnamon bun smoothie to treat your tastebuds to the deliciousness of the treat without all the 'bad stuff'!

If you enjoyed this recipe, you may also like:

Want to Remember This? Pin Cinnamon Bun Smoothie to your favorite Pinterest Board!!

Hi, my name is Shawna, I’m a mom of three beautiful little girls and I love creating vegan recipes that they can help with! Stress Less Be Healthy is all about helping you eat better, discover kid friendly recipes, and create meal plans that your family will be happy with!
Read More!
Disclosure: All posts may contain affiliate links (meaning if you end up purchasing something when you click on the link then I may get a commission on it, with no extra cost to you, of course). This may allow for me to keep this site up and functional. For more information on what this means, visit my disclosure page.
Disclaimer: I am not a doctor or registered dietitian (RD). The information provided on this website is for informational purposed only and are not meant to treat, cure, or prevent any health issue. I am not liable for how you interpret or use the information provided. I recommend you consult with an RD when raising vegan children to ensure they get all nutrients needed for healthy development.
7 shares