Do you need to know what to get 7 year old little girl for Christmas?

It seems like the older our little girls get, the harder it is to buy for them! 7 year olds not only want toys that little girls like playing with, but they are also starting to want things that pre-teens want. It’s like 7 and 8 year olds are ‘pre-pre-teens’.

Believe me, I’m not a fan of this, mostly because it means my little girl is growing up. This is when kids start asking for clothes and accessories from their favorite singer, instead of things with their favorite Disney character on it, at least for my daughter.

So, what do you get a pre-pre-teen? Check out the ideas below, they came from my own 7 year old, not just what I think she wants.

The Best Gifts for 2 Year Old Girls This Year!

Want to Remember This? Pin 16 Ideas For What To Get 7 Year Old Little Girl For Christmas to your favorite Pinterest Board!! 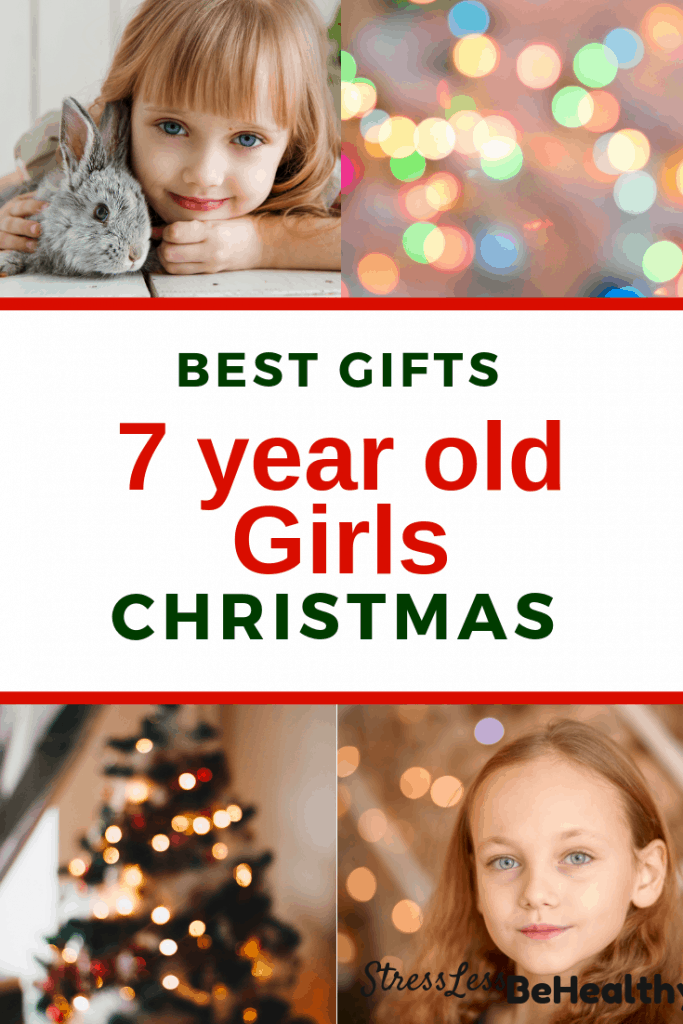 7 year old girls like to play a lot of different things! From board games and card games, to dollhouse and baby dolls. They like singing and dancing, playing video games, and running around outside! They’re at that age where they can have fun doing almost anything. Take advantage of that and buy them things that will broaden their minds and imaginations and challenge them educationally!

They’re personalities are much more developed now than they have ever been, so specifics on the exact things your daughter will want, I can not say. Yet, below you will find some ideas that they will be sure to love!

What are games for 7 year olds?

I’m sure your 7 year old loves plenty of games:

Kids love playing so many different kinds of games. And, it probably wouldn’t be too difficult to find out what your little girl loves; just try asking her!

My 7 year old daughter is obsessed with Jojo Siwa. There isn’t a day that goes by that Jojo’s name doesn’t come up, her stuff is the first thing on my daughters mind when being asked what she wants for Christmas. Her bows, her clothing, bedding, and everything else!

Who does your 7 year old ‘obsess’ over? Maybe they’d like some of the gifts below with their favorite character, actor, or singer, on it!

Of all the bedding sets from Jojo Siwa, this is my daughters favorite and something she is asking for for Christmas.

Many girls love to have dolls of their favorite singer or character, just as boys like their figurines and action heroes!

Sometimes it’s not the doll of the celebrity they want, but their pet! I remember when I was in elementary school I wanted one of the pets from Harry Potter, because that was big back then, and I was Hermoine for Halloween one year. But, my daughter wants a stuffed animal of Jojo Siwa’s Bow Bow.

Jojo Siwa’s most prominent accessory is her bows. They are super popular with young girls, my 7 year old currently has two; for what they are they seem to be a bit on the pricier side. We bought them from Walmart and they were about $8 each! However, there are many other Jojo Siwa accessories that my daughter has also asked for, such as

lip gloss, sunglasses, and much more!

My girls know how important water is and how much they should drink in a single day, which is why my 7 year old is asking for a Jojo Siwa water bottle for Christmas this year.

At 7 years of age, my daughter is starting to ask for clothes for Christmas. If this isn’t a sign of her growing up, I don’t know what is!

Along with 7 year old girls wanting grown up gift ideas like clothes and water bottles, they still want things for little girls, like Barbies. And, for some reason they love the sets that have babies in them! Or, maybe that’s just my daughters, and because they have a baby sister, and they enjoy acting out real life interactions with their Barbies and other dolls. See, playing with dolls has a therapeutic aspect to it, in which it helps our kids understand the world around them! (Can you tell I majored in child psychology for a few years!?)

It seems like toy companies make dolls of almost anything nowadays, or at least any person that little girls would love to have a doll of. This is a doll that my daughter got last year, but if she didn’t already have it, she would be asking for it again this year!

As much as our 7 year olds want to prove to us that they are teens and old enough to do what they want; they still enjoy playing with baby dolls. Whether it’s to pretend to be a mommy like we are to show us they are more mature, or simply to play with! They’re still our little girls!

Even 7 year olds love stuffed animals! I don’t think anyone truly outgrows stuffed animals. Sure, they may change the type they like, whether it be cute animals, from their favorite tv show, or something else. But, everyone loves stuffed animals. And, in case you don’t already know by this time- don’t go overboard buying stuffed animals because they’re cute. They tend to accumulate quickly!

Like mentioned before, kids learn a lot by playing and acting things out. This can be done by playing with dolls, playing house, or playing with toys from their favorite shows! My 7 year old loves many shows, from My little pony to Daniel Tigers Neighborhood and more!

If your daughter doesn’t already have one, then a bike of her own would be a great Christmas present; just make sure you buy one big enough so that she’ll still fit on it 6 months later when it’ll be warm enough for her to ride on it all day long!

As much as you may want to keep your kids away from screens, you’ve got to admit, by this age they’ve already had their fair share of them. So, why not get them their own tablet! They love watching shows and playing on apps. They can use it in the car for long drives, or for shorter amount of times at home so you can get some cleaning or work done (if you work at home), you know, so they don’t interrupt you every 2 minutes. And, not all apps are purely for entertainment. There are some great apps for helping kids learn, too. Such as ABC mouse!

2DS or other Gaming System

Whether your think video games are bad for kids or not, they tend to really enjoy them! Plus, playing video games helps your child with hand eye coordination (or knowing how to move the little buttons to make the character do what they want- generally without looking at their hands), spatial recognition, along with math! Both of my older girls (4 and 7) have a 2DS and love it. The one above comes with Super Mario Bros 2, so you may enjoy it, too!

I’m not really sure what the whole hype is with slime and why kids seem to like it so much. Maybe it’s the way it feels in between their fingers, or maybe it’s that other kids promote it in their shows or on youtube, but they really seem to love it and want it. My daughter brought some home from school last year and I was not a fan- it seemed to stick and not come off of anything it was put on. Luckily, she didn’t get it on the carpet, I have a feeling it would be harder to clean than play doh. But, she is still asking for more, and more specifically this slime set.

Stuffed animals are on thing that just about any kid will love getting for Christmas (or Easter, their birthday, or any day anytime, really!). Just be careful and don’t go overboard with buying stuffed animals; I know from experience how easily they accumulate!

(And yes, I do know this was above, as well, but this idea is for normal cute stuffed animals, not character ones!)

So, What do you buy for your 7 year old daughter?

Battling between little girl and pre-pre-teen, it can start to become difficult to use a generic gift guide for gifts that a 7 year old girl will actually want! This is why the gifts above are ones that you can form to fit your daughters favorite things. Whether they are into nail polish and clothes some days and baby dolls and barbies the next!

So, what do you think you’ll get your 7 year old little girl for Christmas?

Be sure to grab this gift tracker to remember who you’ve bought for and what you’ve bought. Print it out, or edit it on your computer, phone, or tablet, so keep it a bit more secure so others won’t see what they’re getting for the Holidays! (Plus, who doesn’t have their phone on them while shopping, make this Holiday Season a bit easier on yourself and download this PDF.) 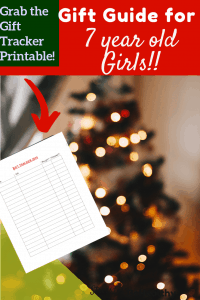 Hi, my name is Shawna, I’m a mom of three beautiful little girls and I love creating vegan recipes that they can help with! Stress Less Be Healthy is all about helping you eat better, discover kid friendly recipes, and create meal plans that your family will be happy with!
Read More!
Disclosure: All posts may contain affiliate links (meaning if you end up purchasing something when you click on the link then I may get a commission on it, with no extra cost to you, of course). This may allow for me to keep this site up and functional. For more information on what this means, visit my disclosure page.
Disclaimer: I am not a doctor or registered dietitian (RD). The information provided on this website is for informational purposed only and are not meant to treat, cure, or prevent any health issue. I am not liable for how you interpret or use the information provided. I recommend you consult with an RD when raising vegan children to ensure they get all nutrients needed for healthy development.
39 shares