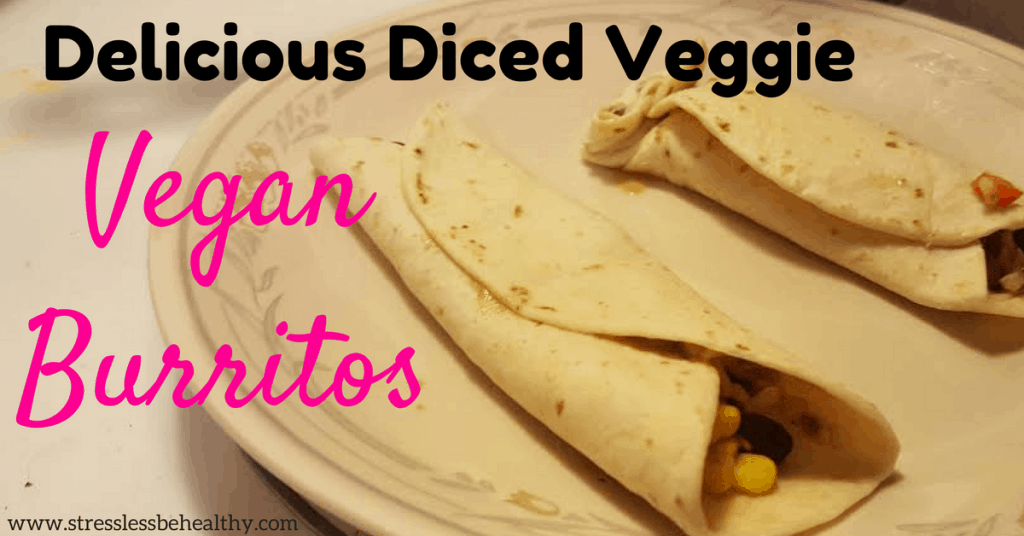 Have you ever tried to make vegan burritos and have them turn out horrible? I hope you haven’t. But just in case you have, I have come up with a fool proof recipe. This recipe is simple and delicious. The filling can also be used for more than just a burrito. It can be used for quesadillas, as a topping on pizza, or all by itself as a meal. (That’s the way my two year old eats it!)

With all of the nutrient provided in this burrito, you may feel an energy boost! I know I felt like I had energy after eating these. However, my daughters did, too. At least I was able to keep up with them for a little bit!

It provides plenty of protein and fiber. And, with the combination of the rice and beans, this meal contains a complete protein; with all essential amino acids. Plus, everyone in this country should be concerned about getting enough fiber their diet! Most people in this country are not getting nearly enough!

This meal was also a part of the A to Z healthy snack series, you can find it in 5 Snacks For Kids That Start With The Letter F. For the snack version, I simply made very small portions!

Usually I start off baking or cooking by getting out all of the ingredients. But for this, it doesn’t make much sense to, unless you have left over brown rice. If you do, then I’m a little jealous of you because that is something I should always have ready to go, but don’t.

So, if you’re like me, the first step to this is to make the brown rice. This can take a little while. For this recipe, simply measure out 1 cup of brown rice and 2 cups of water and start boiling them in a pot on high. Once you notice it’s boiling, put a cover on it and turn the heat down to medium. The trick here is to catch it before it boils right out of the pot. 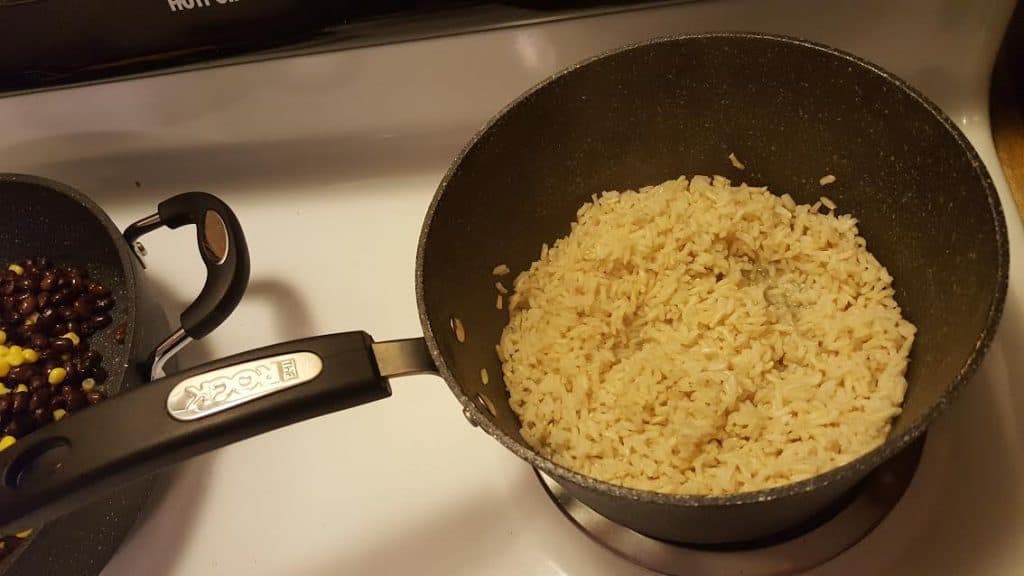 The next step is a little easier, if you use canned or frozen. Open up the can of  black beans and corn. Or defrost them and warm them up to a normal temperature.Then pour both the beans and corn into a large skillet. If you don’t have a skillet, don’t use a pan. This recipe makes a lot, if anything, use a larger pot than what you did for the rice.

If you only buy dried beans, which is what I’ve been trying to do lately; you’ll need to start those much early because of the soaking time. It’s best to soak them over night and then cook them, but you can quick soak them. Do this by bring them to a boil in plenty of water, let sit covered for a few hours. Then cook them in 3 times their water for at least an hour; you’ll have to test them every so often to see if they’re soft.

Then comes the fun part; chopping and dicing all the other veggies. The bell pepper, red onion, and tomato. There’s plenty of time to chop and dice the veggies while the rice (and beans) are still cooking. 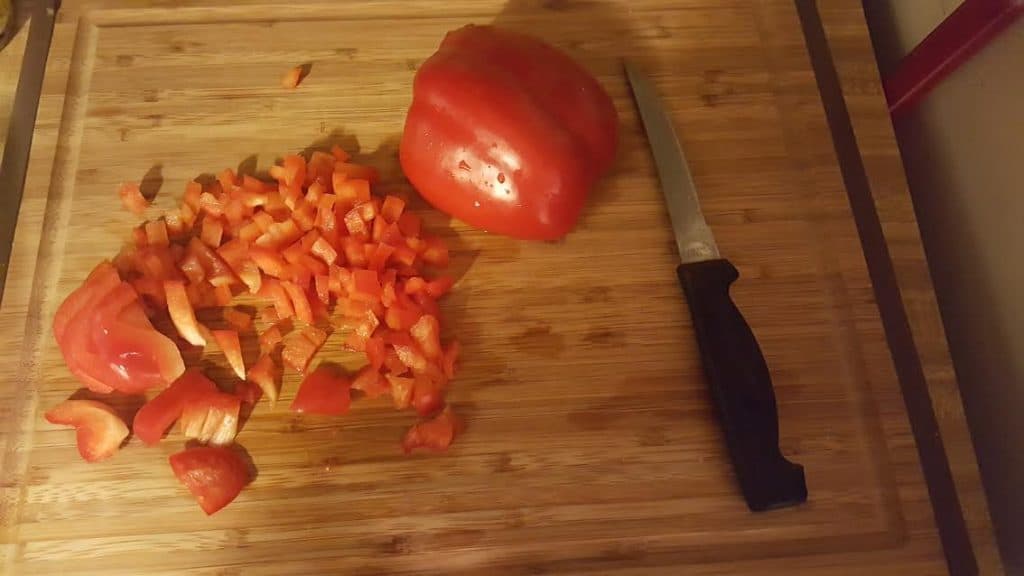 Then pour the diced veggies into the skillet with the corn and beans. The rice should be almost done cooking by now. Unless you’re working in peace and quiet and are quick at dicing veggies. For me, and probably you too, having kids running around and everyone trying to get our attention all at once, does not help with making the process any quicker! The rice should be just about ready as you’re pouring in the veggies. 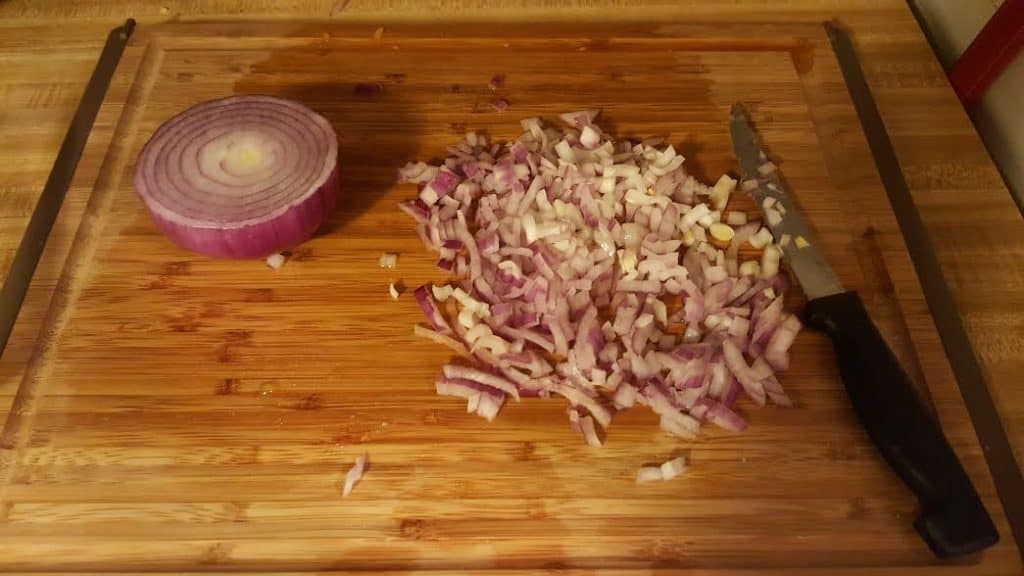 Once you have the veggies in, go ahead and pour in the rice, spices, and salsa. Turn the heat on medium and mix well. We want every ingredient to be in every bite, if possible. It should look like the picture below. Keep the stove on medium to low heat until everything is heated evenly, or about 5 to 10 minutes. 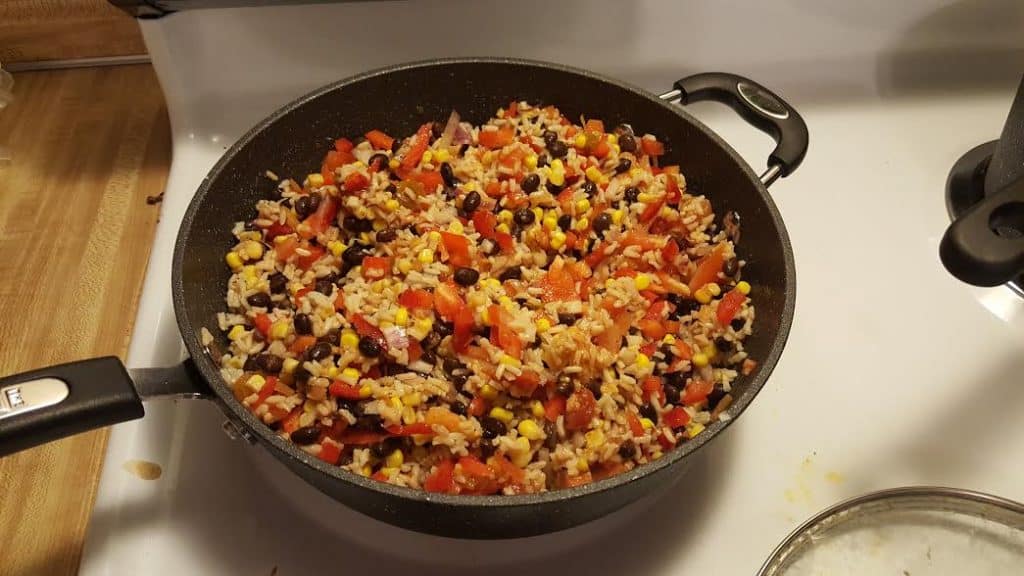 When everything is finally heated up evenly, you’ll know it’s done. And when the filling is done  you get to choose how you want it. You could eat it like a burrito, like myself and girls did the first night we had it. Just make sure you put some nutritional yeast on top of the filling to add an extra nutrient boost. And to help with your vitamin B12 consumption.

Or, you could do what I did with it the second night. Which was sandwich the filling between two tortillas. Then adding the nutritional yeast under the top tortilla and cook it like a quesadilla. Another way to eat this is by just eating it plain. My younger daughter will only eat it that way, and she’s 2 years old. When she tried eating it like a burrito everything just fell out. I’ve also thought of using it as a topping on pizza instead of cheese, to make a vegan pizza. I would slice up some more tomatoes for the top of it, though.

Cook the cup of brown rice in the two cups of water. While that is cooking, open the cans of beans and corn and pour in a skillet. Then dice the rest of the veggies and pour over the beans and corn. Once the rice is done cooking, add it to the skillet. Then add the spices and salsa to the skillet and turn the stove on medium heat. Mix well until everything is heated evenly. Add to the middle of a tortilla, add nutritional yeast before you wrap it up. Then wrap it up and enjoy!!

*This recipe makes a lot!! Feel free to cut it in half. Especially if you’re just making it for one adult and two kids under 5.

Thank you for reading, and I hope you enjoy this diced veggie vegan burrito recipe. Please share any comments below. 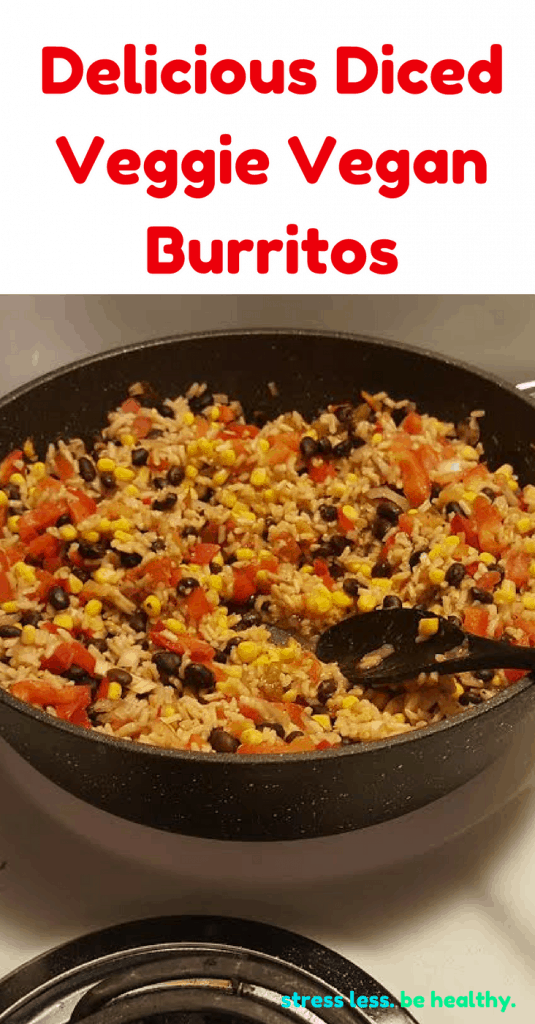 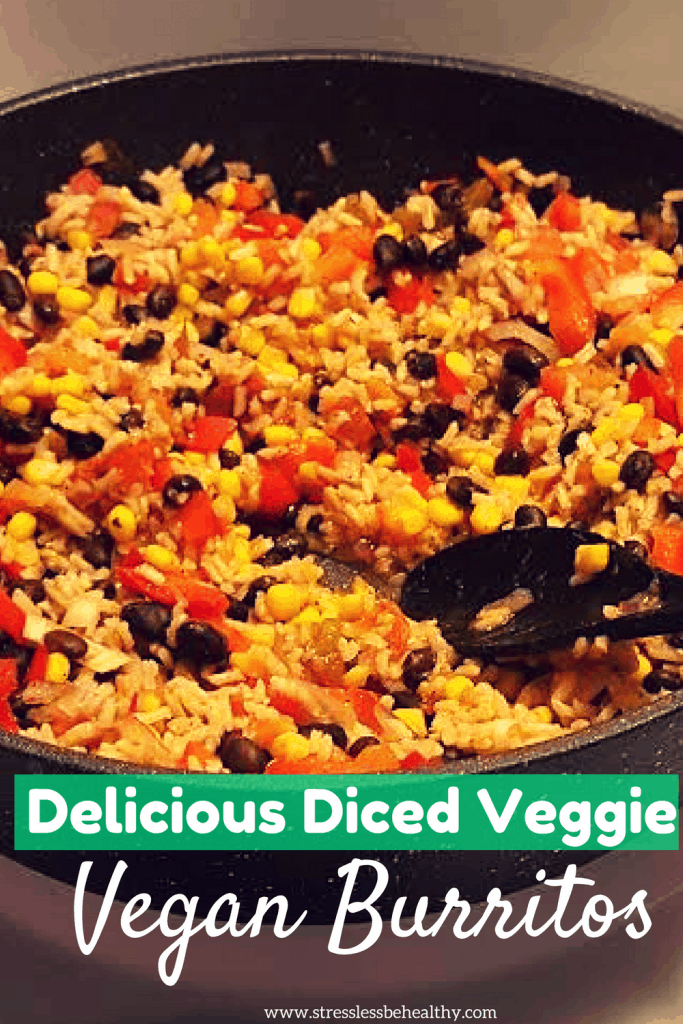 How to make amazing vegan cupcakes and frosting

The Benefits of Meal Prepping

Hi, my name is Shawna, I’m a mom of three beautiful little girls and I love creating vegan recipes that they can help with! Stress Less Be Healthy is all about helping you eat better, discover kid friendly recipes, and create meal plans that your family will be happy with!
Read More!
Disclosure: All posts may contain affiliate links (meaning if you end up purchasing something when you click on the link then I may get a commission on it, with no extra cost to you, of course). This may allow for me to keep this site up and functional. For more information on what this means, visit my disclosure page.
Disclaimer: I am not a doctor or registered dietitian (RD). The information provided on this website is for informational purposed only and are not meant to treat, cure, or prevent any health issue. I am not liable for how you interpret or use the information provided. I recommend you consult with an RD when raising vegan children to ensure they get all nutrients needed for healthy development.
1544 shares