*Disclosure: some links may contain affiliate links. For more information on what this means, visit my disclosure page.

In this article you will find a super easy vegan apple pie burrito recipe. It’s like eating apple pie, without all the time and effort it takes to make it!

This recipe does contain sugar & vegan butter, both are optional and the recipe is quite a bit healthier without them. However, it does taste better with them.

If you are simply aiming for eating vegan then go ahead and enjoy with the sugar and vegan butter. If you’re aim is to eat healthier or more plant-based, omit those ingredients for a still delicious apple pie burrito!

Ok, so honestly, this recipe was created from my old love of getting apple pies from McDonalds and apple empanadas from Taco Bell; yeah…not the healthiest, but that’s in the past.

This healthier version is the future and the kind of dessert I get to make my kids and teach them to make.

And although the sugar and vegan butter (basically the stuff that doesn’t make this recipe plant-based) makes this recipe not whole food plant-based; when we make it, we will make it with those ingredients as we’ll be looking to this as a bit more of an indulgent dessert (breakfast dessert?- those are the best!).

Feel free to omit the sugar in with the apples and the brown sugar glaze on top if your goal is to eat plant-based.

It’s not like we make this all the time, sometimes we make a classic apple crisp, applesauce, apple energy bites, or even apple muffins this time of year.

We LOVE apples! And cinnamon, apples and cinnamon go very well together, and that’s what you’ll get in the recipe below!

Want to Remember This? Pin Easy Vegan Apple Pie Burritos to your favorite Pinterest Board!!

How to Make the Best Vegan Apple Burritos

Alright, so I may be a little biased when I say they are the best, but what can I say!

I love taking food that I loved from my childhood (that I never was taught how to make or that were made outside the home – like fast food), veganize it, swap out most of the unhealthy ingredients for healthy ones, and then make it as simple as possible.

This recipe doesn’t taste quite like apple empanadas or personal sized apple pies, the tortilla kind of makes the texture a bit different, but they’re still delicious.

And sure, you could probably fry them up in oil if you’d like and they’d be amazing! But I try very hard to not use oil (doesn’t always work, but I try!).

*Hint- just because it’s vegan, does not mean it’s healthy! It took me a long time to realize this- the sooner you understand this and are able to implement it in your daily life; the better!

So, you’ll want to start this recipe by preheating the oven to 350F.

Then gather all the ingredients and start cooking the apples on the stove.

For cooking the apples on the stove, you’ll want to cook them in a bit of water and cinnamon.

You can stir it with a spoon or even with a whisk to help break up some larger chunks as they get soft.

Once the apples are done cooking you can add in the cornstarch and sugar.

DO NOT add the sugar in before the apples are done cooking; otherwise they will take longer to cook. This took me a couple of years to learn, but you’ll save yourself a ton of time by adding the sugar in last (if you add it in at all).

When the apples are done…

Get the tortillas ready for the apple filling.

The best way to do this is to grab a large plate and place all the tortillas on it and then measure (with your eyes) how much 1/8th of the filling would be.

Scoop that amount onto the tortilla in the middle about 2/3rds of the way down.

Fold the sides in (about an inch or so, til you get to the filling which should be slightly spread into a horizontal line).

Then roll up your tortilla into a burrito and place in a baking dish (this is the one I use).

Now you’re going to repeat with the rest of the tortillas and apple filling.

Once they are all in the dish, which should not be a problem for 8 apple pie burritos in a 9x13in baking dish (my enchilada recipe calls for 10 in the same dish); go ahead and spread some vegan butter on top and sprinkle some sugar and cinnamon on top, as well. (Only if you want, this step is completely optional!!)

Bake in the oven for about 20 minutes.

While it’s in the oven stir together all the ingredients for the glaze.

Once the burritos are out of the oven and have slightly cooled, drizzle the topping on the burritos and enjoy! (Or use this amazing vegan caramel sauce!!)

Any type of apple should work.

Again, all sugar and vegan butter is optional in this recipe; they are not required for the recipe to work or taste good. But they do take it from tasting good to tasting great!

Feel feel to fry these rather than bake, but they won’t be as healthy.

Why You Will LOVE This Easy Apple Pie-like dessert!!

You and your kids will love this dessert burrito (dessert enchilada, empanada?) recipe because…

If you enjoyed this recipe, you may also like: 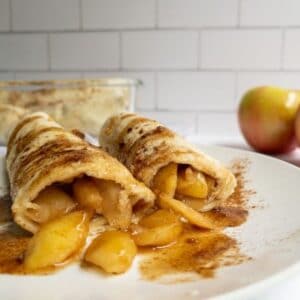 Shawna Clapper
This vegan apple pie burrito recipe is super simple to make and makes for a delicious breakfast, snack, or even a dessert! Call it a burrito, enchilada, or whatever you please, it's a picky eater friendly recipe where the sugar is optional, but always requested!
Print Recipe Pin Recipe
Prep Time 30 mins
Cook Time 20 mins
Course Appetizer, Breakfast, Dessert, Snack
Cuisine American
Servings 8 burritos

The added sugar & vegan butter, and the glaze, are completely optional and simply make for a sweeter burrito, more like a dessert. Feel free to omit those for a healthier meal or snack. Any type of apple will do, our favorite is honeycrisp! You may be able to sub in flour for the cornstarch if you don’t have that on hand; the purpose of the cornstarch is to thicken the mixture.
Keyword apples, burritos, cinnamon, cooked apples, tortillas